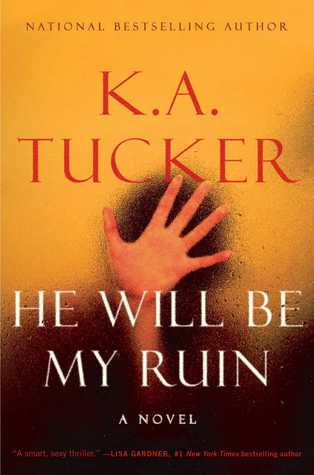 The USA TODAY bestselling author of the Ten Tiny Breaths and Burying Water series makes her romantic thriller debut with this heartpounding story of a young woman determined to find justice after her best friend’s death, a story pulsing with the “intense, hot, emotional” (Colleen Hoover) writing that exhilarates her legions of fans.

Twenty-eight-year-old Maggie Sparkes arrives in New York City to pack up what’s left of her best friend’s belongings after a suicide that has left everyone stunned. The police have deemed the evidence conclusive: Celine got into bed, downed a bottle of Xanax and a handle of Maker’s Mark, and never woke up. But when Maggie discovers secrets in the childhood lock box hidden in Celine’s apartment, she begins asking questions. Questions about the man Celine fell in love with. The man she never told anyone about, not even Maggie. The man who Celine herself claimed would be her ruin.

On the hunt for answers that will force the police to reopen the case, Maggie uncovers more than she bargained for about Celine’s private life—and inadvertently puts herself on the radar of a killer who will stop at nothing to keep his crimes undiscovered.

Quick note: I’m not sure how this book is being marketed, but in my opinion, this book is Suspense, it is not Romantic Suspense. I’ve read every book by this author, so I know that this is a bit of a departure for her. I love suspense in any form, I don’t want other readers to have expectations going in and then be disappointed because it isn’t what you expect. So take that however you want.

When Maggie’s childhood friend, Celine, commits suicide, she travels to New York to collect her belongings. Whether she just can’t accept what her friend did, she challenges the police report from the get-go. This book centers on her quest to find out the truth.

Although Maggie is certain that her friend was not suicidal, it was clear as she uncovered information about her friend, that she really didn’t know her that well. And I’ll be honest, I didn’t like Celine’s character. At least not in the manner she was described. She’s obviously a good person deep down, but I think she took the wrong road to financial stability. I get wanting independence and carve your own path, but with the health of her mother, Rosa, deteriorating, I don’t understand why she took the hard road instead of the quick and easy one that Maggie would have offered. There’s so much more here that I could say, but I’ll keep it too myself.

Maggie reaches out to Celine’s co-workers, acquaintances, and lovers, some approaches being upfront, some she handled in a more devious manner. After discovering a compromising picture of one of them, he becomes her main target. As she is digging into that man, I had my concerns about Celine’s other acquaintances, something wasn’t adding up. Maggie’s tenacity was admirable, doing so much for a friend that didn’t think that highly of her, and that tenacity yielded good and bad results. I found myself admiring her intelligence one moment and then wanting to smack her the next. She made a lot of mistakes along the way that led her to a bad place (see prologue).

What I liked most about the story was how I thought of a different suspect than Maggie, was proud of my guess, and then the author threw in a bit of trickery to lead the story another direction. Looking back, I’ll admit, some clues were almost too perfect. Planted to throw her and the reader off.

This story has a HEA in that Maggie does get her answers. But remember, this isn’t a love story, per se, although there is passion and heartbreak. Overall, I liked Maggie’s character, she truly looks out for others more than herself sometimes. I also loved Celine’s neighbor, Ruby and her detective helpers, Doug and Zac. Together, the group unravel the true story about Celine’s death to give her mother some peace of mind.

*An ARC was received via NetGalley for an honest review.