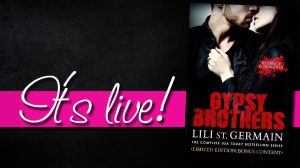 ALL 7 books in the COMPLETE Gypsy Brothers series are now in ONE SET!  This dark, adrenaline-induced, revenge BIKER series is ONLY $0.99 for one week.

DO NOT miss this epic sale!

If you are already a fan of the series — Lili has INCLUDED BONUS EXCLUSIVE NOVELLA!

NOW AVAILABLE at the following retailers:

My father was most certainly NOT an innocent man. As the leader of the Gypsy Brothers Motorcycle Club, he was guilty of many things. But he died for a crime that he didn’t commit, framed by an enemy within who then stole his club and everything he had ever worked to protect.

When Dornan Ross framed my father, he set into motion a series of events that could never be undone. My father was murdered by Dornan Ross and his sons when I was fifteen years old.

Before my father died, Dornan Ross and his sons stole my innocence, branded my skin and in doing so, ensured that their lives would be prematurely cut short. That they would suffer.

But I didn’t expect to fall for Jase, the youngest brother in the club.

I didn’t expect that he would turn my world upside down, yank my heart out of my chest and ride away into the sunset with it.

Now, I’m faced with an impossible choice – Jase, or avenging my fathers death?

**This bundle contains all books in the Gypsy Brothers series plus a bonus exclusive novella.**

This trailer was shot on location in Venice Beach by Red14 Films, exclusively for Lili!

There’s something to be said about a person who’s been put in hell and doesn’t lose themselves.

But what if you find yourself there instead?

“Say it,” Chad said, sliding one finger inside Rails so that she flinched. Even with the drugs, the rough way he was poking and prodding at her must have hurt. “Say you’re no better than us. Say you’re one of us and I’ll let her go.” I looked to Rails, but she wasn’t even there. Whatever drug was in her bloodstream, it looked effective.

“And?” Chad prompted, snaking his tongue out to lick Raelene’s earlobe.

“A fucking Gypsy Brother!” I screamed.

Normal men don’t want to hurt the women they love.

Normal men don’t have a darkness inside them.

But I’m not normal. I never was. I might’ve been patched in by force, but it doesn’t change the fact that I’ve got GYPSY BROTHERS forever etched into my skin, and their blood running through my veins.

I might look like a good person on the surface, but it doesn’t change the fact that I’m Dornan Ross’s son.

Lili writes dark romance, suspense and paranormal stories. Her serial novel, Seven Sons, was released in early 2014, with the following books in the series to be released in quick succession. Lili quit corporate life to focus on writing and so far is loving every minute of it. Her other loves in life include her gorgeous husband and beautiful daughter, good coffee, Tarantino movies and spending hours on Pinterest.