Emma
ONE NIGHT.
We f*cked. I came — a lot — and then I discovered something so devastating, it ruined everything between us.

Jai’s got a life I’d never even considered, and now our filthy-hot one-night stand is just… filthy.
I’ll do whatever I can to get him out of my head, but that’s easier said than done when I can’t stop running into the smug bastard.
Every time I lay eyes on him, I’m not sure if I want to kiss him or kill him.
What’s wrong with me?

Jai
CHICKS ARE F*CKED.
F*cked in the head, that is. I swiped left on Emma and it was all going so well – we met, we talked, and we f*cked. Oh, how we F*cked. So many times, I lost count.
The next morning, I even considered – briefly – the possibility of seeing her again. Because I really, really like her.
So naturally, she turned into a psycho bitch the moment I brought breakfast back to the room.
She left, and I thought I’d never see her again.
Boy, was I wrong.

This was a little better, but then it got dicey for me in the middle.  Again, this is a very quick read so this will be a quick review.

After having spent the night with Jai and literally screwing her brains out, the next morning Emma wakes up a little disoriented and remembering the hot not she had.  Jai runs out for a bit to get them breakfast, when Emma being a little nosey notices something she did not want to see.

She runs out of the hotel like a bat out of hell leaving Jai very confused.  Emma is so hung over and pissed off at herself, after waking up from a long nap, she remembers she’s supposed to be at her mother’s hotel for a pre-wedding dinner.  As you may already know, her mom is remarrying.  Well little did she know when she arrives, whom does she bump into, none other than Jai himself.  She’s shock to say the least.  Not only is she still pissed off at him, but to find out he will be her future stepbrother is all that she can take at the moment.

Jai is very alpha and still confused as to why Emma left the hotel, when she fesses up, he’s puts her straight, but it doesn’t ease up her mind now that they are going to be “related”.

So my issue was the lack of communication on Emma’s part and the back and forth between her and Jai.  The taboo of the storyline does not bother me a bit.  I guess I have to see how the story progresses with books 3 and 4.

*An ARC was provided by the author for an honest review. 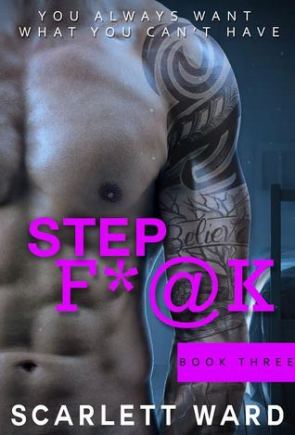 *Part three in a four-part series*

That’s all I did. A few too many glasses of wine with my best friend and the bitch convinced me to go on one of those dating websites.

And you know what? It.was.amazing.

I spent all night in a sexy stranger’s arms, hot and sweaty, until it was time to sneak out and do the walk of shame back to my apartment.

I never thought I’d see sexy stranger again, and I was totally fine with that – until my mother’s wedding.

She’s getting remarried, see. And sexy stranger just happens to be my new stepbrother.

All the wine in the world isn’t going to make this better.

As we move along book 3, Jai and Emma are spending time at his father’s Summer home before the big wedding.  Emma’s reservations regarding Jai are still the same.  She just can’t wrap her heard around having a relationship with him knowing they are going to be step-siblings.  This is where I had my most frustrating moments with Emma.  Jai is all in, he doesn’t care about the consequences.  He was someone who did want any relationship with anyone seeing his parents drift apart and then divorcing.

I will say this, the sex scenes were very hot, there’s a shower scene, oh boy watch out for those moments.  When Emma proposes to Jai to keep it just sexy only, Jai at first agrees, thinking he could convince her otherwise, but it doesn’t happen the way he wants.

Again, for me, Emma’s indecisiveness, was really pissing me off as a reader.  I get that she didn’t want to go “there”, but you can’t help what the heart wants, IMHO.  Jai, was the mature one, he knew what he wanted out their relationship, he was all in.

So book 3 ends with Emma leaving Jai’s father’s lake home and proceeds to follow her dreams in Paris.  Let’s see what happens with book 4 because, this one although the sex was hot, that was it for me.

*An ARC was provided by the author for an honest review.