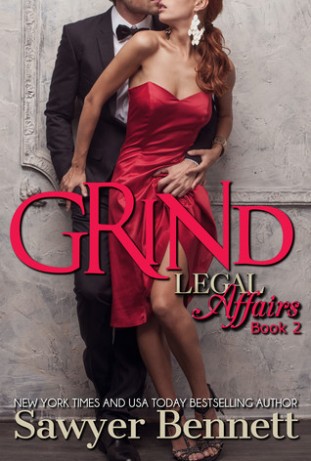 Grind is the second book in this Legal Affairs trilogy (Cal and Macy’s Story) and is releasing on 4/21/15. Clash was released on 4/7/15 and Yield will be released on 5/5/15. Grind and Yield are full length novels, while Clash is a novella.

Macy Carrington is not the woman I once thought her to be.

What she does not allow her heart to feel, she gives with her body. The sex between us is explosive and depraved. I’ve done things with her that would never have crossed my wildest imagination, and I can’t ever seem to get enough.

But now I want more from her. I want to figure out her dark secret, expose it and then help her to heal from it. I know, without a doubt, that Macy is capable of love, and I will grind her down until I make her accept the truth of it.

Grind (verb): to wear down, polish, or sharpen by friction

Cal Carson is not the man I once thought him to be.

Strong, determined, sexy as hell and a beast in the bedroom. He is every woman’s fantasy.

He is my fantasy.

But no matter how hard Cal tries to grind me down, my heart and secrets are mine and mine alone.

We pick up where Clash left off, Macy need Cal’s legal expertise to fight off a frivolous lawsuit. At first Cal did not want to represent Macy, but after further review and he’s such a sucker for her, he acquiesces. Before he does, he makes sure to let Macy know that he will not jeopardize his legal career and therefore, they will be no hanky panky and as much as it kills them, they both agree, until after the case resolves. Well it does resolve, and when these two hit the sheets, go grab your favorite battery operated toy because it is scorching hot.

The alternative POVs are really good, although Macy’s POV is a little different. You sense she is so broken, her parents are aholes for sure. Macy, who doesn’t do repeats, cannot seem to stay away from Cal and vice versa. Macy does not do intimacy, yet Cal in some way gets her to do things, like cuddle. “There’s nothing remotely lovable about me, so I’m not worried.” That right there, pulled at my heart. Yet, we still do not find out what is the real issue as to why Macy is so broken. We sought of get a peek when she’s with her parents, but not the full story. So you already know there is another cliffhanger and it’s a big one involving said ahole parents.

Let me say this, I really liked Clash, but Grind, is by far my favorite. Their sexy times by far way hotter than the first book. Let’s just say when you get to the sex club scene and back door action, you will know what I’m talking about. Sawyer really stepped it up this book big time. I cannot wait for Yield and hopefully get my answers regarding Macy and her passed and why she doesn’t do the relationship thing. I am rooting for Saint Cal (although not so saintly with the sexy times). I will also say that this book is also a quick read and will keep you turning the pages and wanting more.

*An ARC was provided for an honest review. 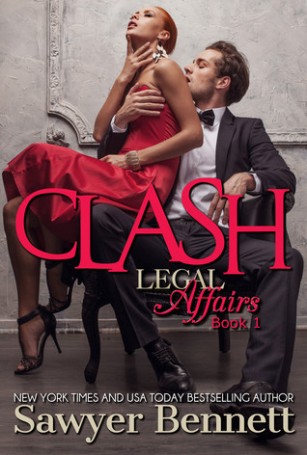 It might be fair to say that I despise Macy Carrington. She slings insults with precision, not caring about the destruction she leaves in her wake. We clash in a battle of wills every time we’re around each other, and yet… I still fantasize about being lodged deep within her body.

Clash (verb): to come together or collide.

I have never encountered someone that grates me the way Cal Carson does. His pompous, arrogant demeanor. A holier-than-thou attitude. Any interaction with “Saint Cal” ends in a verbal clash of epic proportions, and yet… there’s no one I’d rather have in my bed than him.

Her breathy moans mingle with the sound of our flesh coming together, clashing with the silence that surrounds us, dispelling any notions I once had about Macy Carrington.

Maybe I can break down her walls if we can call a truce to this battle.

He whispers filthy words in my ear, provoking feelings I never knew were possible. The burning desire in his touch clashes with everything I once believed about Cal Carson.

Maybe he can be the balm I need to soothe my broken soul, if only temporarily.

New York Times and USA Today Bestselling Author, Sawyer Bennett is a snarky southern woman and reformed trial lawyer who decided to finally start putting on paper all of the stories that were floating in her head. Her husband works for a Fortune 100 company which lets him fly all over the world while she stays at home with their daughter and three big, furry dogs who hog the bed. Sawyer would like to report she doesn’t have many weaknesses but can be bribed with a nominal amount of milk chocolate.

Sawyer is the author of several contemporary romances including the popular Off Series, the Legal Affairs Series and the Last Call Series.