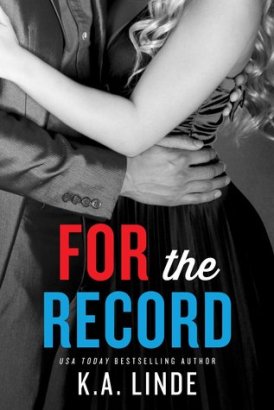 With Congressman Brady Maxwell up for reelection and journalist Liz Dougherty about to graduate into a promising career, the ambitious couple’s future is brighter than ever. They share a passion for their work…and for each other. But when Brady holds a press conference to officially introduce Liz as his girlfriend, reporters hungry for a scandal bombard her. Now, her every move is under a vicious magnifying glass, and her life feels like it’s falling apart.

On the road to reelection, the passionate bond between the congressman and the journalist gets tested at every stop. Threatened by shameless media sensationalism and jealous exes, Brady and Liz now have to learn to trust each other despite what they read in the papers.

In the finale to USA Today bestselling author K.A. Linde’s sexy Record trilogy, Liz and Brady may be setting off fireworks along the campaign trail, but can their love transcend politics as usual?

Story: 4.5 stars
This is the final chapter of Liz and Brady’s story, and the author seems to have saved the best for last. While I experienced a range of emotions through the previous two books, including anger, frustration, heartache, this book was the first where I was happy through most of it. That isn’t to say their isn’t drama in this book. There are many people trying to take down this couple. But Liz and Brady show real maturity in this book. They tackle the problems together, and are truly supportive of each others success.

As I mentioned in my previous review, I was one, if not the only Team Hayden supporters, up until a point. In this book, I see the error of my ways, and am now officially a Team Brady supporter. A lot of that has to do with his disclosure of the relationship to the media. I was never comfortable with how he kept Liz a secret. I couldn’t fathom being treated like that, and to me spoke about the level of commitment Brady had to the relationship. But I think there time apart was a wake-up call to Brady and he righted his wrongs with her.

Through the first two books, I also struggled in connecting with Liz. In book 1, I felt sorry for her, but couldn’t grasp how she would allow herself to be treated the way she was. In book 2, it frustrated me to no end how she was always fixated on Brady, even though she walked away, and into Hayden’s willing arms. I didn’t think she gave Hayden a fair chance, even after admitting she loved him. But I really liked Liz in this book. She had a ton of shit come down on her, losing reporting positions and being categories unkindly in the media (SHOCKER). And she took it all in stride. With the guidance from her mentor, Liz reevaluated her life and took on new challenges, which is admirable given the pressure she faced.

Together, Liz and Brady were perfect and I never doubted that they were meant to be in this installment.

Aside from Liz and Brady, this book exposed the true nature of other side characters:

*Hayden – Up until the last third of On The Record, I really liked this guy, and it was great to see him redeem himself. He truly is a good guy, he just wasn’t meant to be Liz’s guy. But he shows a strength, intelligence and selflessness in doing the right thing.

*Calleigh – For a girl so smart, she sure is dumb. And I’ll leave it at that.

*Clay – Surprise, surprise. This guy isn’t a dick after all. I loved that he reconnected with Brady, and seemed to evolve from his previously slimy behavior.

*Victoria – The perfect BFF. I love this woman’s attitude and carefree lifestyle, comfortable in her kinky choices.

Performance: 4.5 stars
Thankfully, the same narrator was used for this book. I loved her performance in book 2, and she’s the reason I decided to go audio rather than read the book. She was great at capturing the highs and lows Liz faced emotionally. My favorite scene, the Liz/Calleigh psedo-catfight. Meow!

Overall: 4.5 stars
This was the perfect end to the series. New connections were made and fortified. Drama was resolved. And despite the pressure of an election and media scrutiny, Liz and Brady show that they are stronger together than apart, making a pretty kick ass team.

Seeing the author’s FB posts after the release, I’m very excited to hear that both Savannah and Clay will be getting their own books. The Maxwell legacy lives on!

Click on the images below to purchase the previous books in the series: