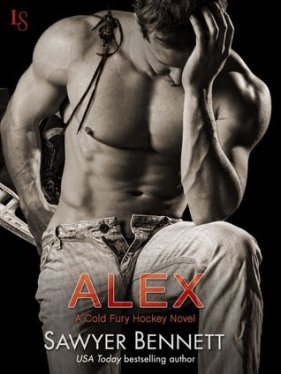 Hockey star Alexander Crossman has a reputation as a cold-hearted player on and off the rink. Pushed into the sport by an alcoholic father, Alex isn’t afraid to give fans the proverbial middle finger, relishing his role as the MVP they love to hate. Management, however, isn’t so amused. Now Alex has a choice: fix his public image through community service or ride the bench. But Alex refuses to be molded into the Carolina Cold Fury poster boy . . . not even by a tempting redhead with killer curves.

As a social worker, Sutton Price is accustomed to difficult people—like Alex, who’s been assigned to help her create a drug-abuse awareness program for at-risk youth as part of the team’s effort to clean up his image. What she doesn’t expect is the arrogant smirk from his perfect lips to stir her most heated fantasies. But Sutton isn’t one to cross professional boundaries—and besides, Alex doesn’t do relationships . . . or does he? The more she sees behind Alex’s bad-boy façade, the more Sutton craves the man she uncovers.

As a big hockey fan, this is not the first hockey romance I’ve read (see our Pucks & Smut event we ran on 10/8 as proof).  So when I read a book about hockey, I’m always critical of how the sport I love, is portrayed.  It’s no secret this author is a hockey fan, and in this book, more so than the 2 hockey books in the Off series, she really does showcase her knowledge about the sport.  And I can easily say after reading, it is at the top of my favorite hockey romance books.

This was such a different approach to a sport romance.  Our male hero, Alex is known by all as the MVP, which could mean his exceptional ability in the sport, or his attitude towards it and its fan, not so fondly referred to as Most Valuable Prick.  And trust me, he lives up to this nickname.  In this beginning of this book, this guy is a douche with a huge chip on his shoulder.  Although I have never heard of a player hating the professional sport he played, I got the overall message behind it.  You’ve seen it all before in real life, the young kid being yelled at by his Dad that he missed a catch, or is just plain not-good-enough.  What happens if that sort of tough love is put upon you every day of your life, and no matter how good your stats may be, it is never enough?  It is easy to see why Alex feels the way he does about the sport.  While I didn’t understand how he couldn’t break away from that toxic relationship, he seems to be a glutton for punishment.  Literally.

When he meets Sutton, under team orders, he brings out his best pricky (is that a word?) behavior.  But as a drug counselor who deals with difficult people/situations on a daily basis, she isn’t offended which drives his attraction to her.

I’ve been an ass, a prick and an overall schmuck to many, many people in my life, because I act out my anger and daddy issues towards others.  But never once did I feel shame or even the slightest bit of guilt for my actions.
Yet, here I am now, and Sutton Price is making me feel pretty fucking small.

She’s not like the other women he’s met before.  Not only does she not recognize him, but she doesn’t know a thing about hockey.  As the story develops and a slow friendship builds between them, with a simmering attraction, it is clear that these two were made for each other.

Sutton’s initial home life was not too different from Alex’s.  Unlike Alex, things turn around for her and her Mom, but she’s learned lessons from her youth, which guide her career, wanting to help others.  Because of the similarities in their Dads, and Sutton’s experience as a counselor, she recognizes the pain that Alex tries to guard.  She’s cautious and probing, but not aggressively so that it turns him away.

“You learn to forgive and move on, and you learn from your pain.  You don’t let it control you, and you certainly don’t hide from it.”

Despite Sutton’s lack of hockey knowledge, I loved how she developed an interest in the sport.  At one point she is watching the game at home and when Alex scores a hat trick, which she only recently learned the meaning behind it (one player scoring three goals), she promptly runs to her room and grabs a hat to throw at the TV.  So freaking cute, I loved it!  But more than Sutton’s developing love for the sport, she gives something to Alex he hasn’t felt ever, a reason to love playing the sport.  Slowly, Alex’s MVP nickname takes on the more appropriate meaning.

But can a leopard change its spots?  Unfortunately, Alex’s pricky behavior resurfaces and he makes a monumentally dumb decision. Which bites him the ass. Fortunately, the amazing supporting cast of characters comes to the rescue. Garrett, Alex’s teammate leads the charge. This guy is awesome and I’m so excited to see he is getting his own book. Along with Sutton, he helped in turning about Alex’s asshat attitude. When Alex reverts back to that attitude, Garrett steps in to set Alex straight. Along with Garrett, Glenn, Sutton’s adorable step-brother plays a strong role in the story. I wanted to hug this kid so hard. He has such a great attitude, I wish more kids were as selfless as this one.

While I liked the storyline and supporting characters, the main reason I loved this story, was Sutton. If you follow me on FB or Twitter, you’ve seen me complain about these weak female characters. I’m so sick of their insecurity. So, while Sutton has her own self-esteem issues, she doesn’t seem to wallow in it. Her priority in life is helping others. Her compassion for the people around her is something to praise and admire. I have no idea how she handled the breakups in her life. Maybe she was a bit too kind to the men who used her and took the selfish way out. But she doesn’t let the heartbreak control her life. She moves on. And is the type of attitude I can totally support.

Parting thoughts: The Love Actually scene – so awesome! I had the biggest smile on my face reading that scene. LOVED IT!!!!

*An ARC was received from the publisher via NetGalley for an honest review.

USA Today Best-Selling author, Sawyer Bennett, is a snarky southern woman and reformed trial lawyer who decided to finally start putting on paper all of the stories that were floating in her head. She is married to a mobster (well, a market researcher) and they have two big, furry dogs who hog the bed. Sawyer would like to report she doesn’t have many weaknesses but can be bribed with a nominal amount of milk chocolate.