Finn Clyde is a nobody. He’s broken. He’s brilliant. He’s impossibly cynical. And all he wants is a chance at life.

One girl. One boy. An act of compassion. A bizarre set of circumstances. And a choice – turn your head and walk away, or reach out your hand and risk it all?

With that choice, the clock starts ticking on a man with a past and a girl who can’t face the future, counting down the seconds in an adventure riddled with heartbreak and humor, misunderstanding and revelation. With the world against them, two very different people take a journey that will not only change their lives, but may cost them their lives as well.

Infinity + One is a tale of shooting stars and fame and fortune, of gilded cages and iron bars, of finding a friend behind a stranger’s face, and discovering love in the oddest of places.

My Review
I’ve admitted before to having an endless TBR list, and spending way too much time planning my next reads, so there are very few authors I would drop everything to read their latest release.  Amy Harmon is one of the few on that list.  I’ve loved every book she has written so far, both Making Faces and A Different Blue made my Top Ten List of favorite books for 2013.  Her writing is flawless, the stories both compelling and beautiful.  So my expectations were once again set high.  And she didn’t disappoint.

This story is truly unique about a bizarre road trip filled with pain, drama, overcoming prejudgment, and offering a helping hand, all of which lead to an unbreakable bond between two very different people.  Bonnie Rae Shelby has it all.  As a rising country singer, she’s has popularity, fame and wealth.  But she’s miserable.  Infinity James Clyde has nothing.  A recently released ex-con, he is struggling to figure out the direction of his life.  One fateful day on a bridge in Boston, their paths cross, setting into motion a crazy set of events that change both of their lives.

There is so much about this story that I loved.  Starting with the two main character’s names, her first name being Bonnie, his last name being Clyde.  Despite being on the run, so to speak, they aren’t really outlaws.  They are running from their past.  That doesn’t stop the media and Bonnie’s horrible grandmother/manager, from creating a multitude of lies or baseless rumors about the couple.  As they travel across the US, the media continuously reports of their possible crime spree a la Bonnie and Clyde, while they are actually offering assistance to various people they meet along the way.  With their journey, they realize they have more in common than at first glance. They begin to depend on each other and fear what might happen once they reach their destination.

One common theme in Amy’s books is how she weaves in history/academics within her books based on her character’s passions (she is a former teacher, after all).  Of her books I’ve read, A Different Blue featured a history teacher; Running Barefoot, it was music and Indian history; Making Faces, it was mythology; and in this book, it is math.  Sounds weird, right?  But she makes it work.  As an example of the author’s creativity, Infinity was named by his mathematician Father, because he was born on August 8th, and the Infinity symbol looks like the number 8.  So clever.

Along the road trip, Infinity (Finn), frequently talked about numbers. All of this was above Bonnie’s level of understanding, but it helped her to relax, with all the stress engulfing her life.  Numbers also play a key role in saving Finn near the end (to prevent spoilers, I won’t elaborate).

“The tattoo is a reminder that choices made out of desperation are almost always bad choices.”

This whole trip, screamed desperation.  While I liked what the road trip offered Bonnie and Finn, I admit to often questioning the characters decisions to not come forth and deny the awful media allegations about them, but then I realized that would have ruined the story.  The bond between Bonnie and Finn was formed through the road trip and only got stronger with each day.  If they had come forward earlier, that bond would have broken and we’d likely get a very different ending.  And I think the characters knew this too. Bonnie, in particular, knew that ignoring the media reports probably wasn’t right, but she was enjoying their private bubble, something she missed from her life, and she didn’t want to burst that bubble. 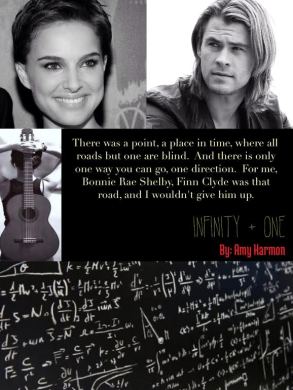 It’s also clear that Bonnie is a bit too trusting, which is why people have taken advantage of her in the past.  She does use the road trip as a chance to gather her strength and finally show us some backbone when the time is right.

If you are familiar with the author, than you know the level of sexy times is low.  But I loved the intimate moments between the couple. They were random and spontaneous, one moment leading to a very interesting turn of events during their trip. 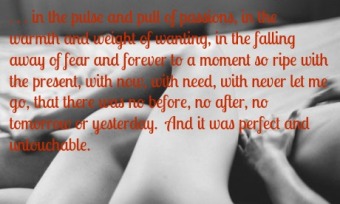 This story isn’t your average love story, and that’s why I loved it. Amy’s work continues to amaze me.  Her plot lines are fresh and creative.  She is able to continually give the reader characters you want to care about.  Sure, like any good romance novel, the characters have issues, but it’s how the characters overcome those issues that draw you in.  They don’t sit around crying for themselves . . . much. They rely on the people they meet along the way, to guide them through their troubles.  Bonnie and Finn rely on each other, along with a supporting cast of characters they meet along the way, and two of their other halves, who they lost too early (this will make more sense when you read the story).  With that support, the rumors and efforts to keep them apart, don’t stand a chance.  After all, despite what math might say, in their minds, Infinity + One = Two.

“We’re Bonnie and Clyde!  Wanted and unwanted.  Caged and cornered.  We’re lost and we’re alone.  We’re a big, tangled mess.  We’re a shot in the dark.  We’re two people who have nowhere else, no one else, and yet, suddenly that feels like enough for me!”